By Diane Clehane|2 days ago
I was really looking forward to today’s ‘Lunch’ with Steve Perrine, who I’ve known since his days as editorial creative director at Men’s Health. He’s been working on a new lifestyle and fitness TV show with Seth Feldman called Better Man, which is slated to have its broadcast debut in national syndication later this year.

Steve brought along the program’s co-hosts: Brian Jones, a former NFL linebacker turned CBS Sports Radio host and television commentator, and Gwen Lawrence, a yoga and meditation coach. On Better Man, Brian and Gwen share bite-sized bits of wisdom about everything from fitness and nutrition to style and relationships. If the easy and engaging rapport between the two of them at Michael’s was any indication, the show is sure to attract plenty of viewers in search of tips guys can actually use to navigate the tricky terrain of modern life. 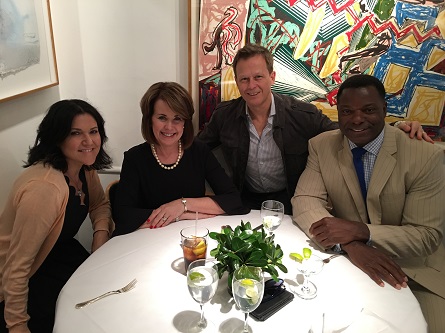 (l to r) Gwen Lawrence, Diane Clehane, Steve Perrine and Brian Jones
“The show is for men who want to be better men–and the women who love them,” said Steve as we settled into the lounge while waiting for the people who were still having breakfast (!?) at my table to leave. Gwen, a sought after instructor who has worked with scores of athletes on a host of professional teams including the New York Giants and New York Knicks, quickly jumped in. “You mean the women who rule them.” I knew we were in for a fun lunch.

A year ago, Gary Rosen of RLR Associates approached Steve with the idea of doing a show with his clients Brian and Gwen that wasn’t necessarily focused on sports . “We turned [the concept] upside down. We’re much goofier. I wanted to get away from sports,” said Brian, who is already fully immersed in that world with his work with CBS Sports. Rather than position Brian and Gwen as ‘experts’ like a lot these shows, said Brian, Better Man takes viewers on the same “personal quest” for answers with the hosts. [The new format] was perfect, it checked all the boxes.”

It was their mutual love of yoga that brought Brian and Gwen together professionally. They met four years ago when Gwen was a guest on Brian’s radio show. She “stole the show,” recalled Brian, by getting up on his desk and demonstrating ‘the frog’ yoga pose. “I’m glad it was on the radio,” quipped Gwen.

A few years after that memorable first encounter, Brian was introduced to yoga by a friend and it changed his life. “If I’d been doing yoga, it would have extended my career [in professional football] a number of years. A lot [male] athletes do yoga now but for years, their machismo got in their way.”

After his football career ended, he faced various personal struggles and credits yoga with setting him on the path to overall wellness. In 2006, he started his own apparel line, Yoga Is My Gym, which is sold through his online store. Three years ago, he brought on Gwen to workout with him in the videos sold on his website.

With Brian and Gwen as co-hosts, the concept of Better Man evolved into a half-hour show comprised of six “micro-segments” addressing different parts of a man’s life. The mix includes “Barbershop Therapy” where Brian seeks out the wit and wisdom of someone who understands the male psyche better than any therapist–his barber. And in “5 Minute Fix,” Gwen offers simple solutions to everything from snoring to hangovers. “They really help!” said Gwen.

There’s also “Gwen Among Men,” wherein Gwen enters a “no-judgment zone” and gets guys to open up about their questions about women. “I ask them all kinds of questions,” said Gwen as we settled into our table. “I asked ‘What’s you best pick-up line?’ Some of them were hilarious.”

Humor is built into the show’s DNA. “It’s the kind of show that would not be out of place on Comedy Central,” said Steve. “We lead with humor.” But Better Man, targeted to men 18-45, has been created to live on broadcast and digital platforms and, said Steve, is the perfect setting for integrated product placement. The segments can also air separately on places like Taxi TV and advertiser’s websites. “I don’t think there’s been anything out there like this since what Men’s Health was doing back in the nineties. There’s been nothing to take its place,” he told me. “Men are just as eager [for lifestyle tips]– especially now when they’re bombarded with so much conflicting information.”

One of the things that interested Steve most about Brian and Gwen was their shared experiences working with athletes. Gwen, who is married to her “high school sweetheart,” former professional baseball player Ted Lawrence, and has been working with various sports teams for 20 years, told me, “When I started, [the players] were my contemporaries, now they’re the same age as my kids. I’m like a mom to them and they look to me for advice on a lot of things from relationships to babies.” Her approach, she said, is to always “be authentic” and smart. “I get to know the wives and girlfriends too so they know there’s no agenda.”

“I was there, so I understand the ups and downs,” said Brian of his approach to interviewing athletes. This morning, he interviewed Kenny Anderson about his upcoming documentary. “Only one percent of celebrities get to leverage that for the rest of their lives. The rest of us have to reinvent ourselves. I can talk about that.”

So what’s the biggest difference between today’s athletes and those who played decades ago? “A sense of entitlement,” said Brian. “They’re more cocky,” said Gwen. “These guys have gotten everything they’ve ever wanted since they’re were sixteen but when they hit 23, things change.” It’s that hard-won experience about caring for body and soul that make Brian and Gwen such an engaging and relatable team on Better Man.

April/May issue
Not surprisingly, Better Man is just one of several projects for all parties involved. Steve, Brian and Gwen are living examples of that old chestnut, “If you want something done, give it to a busy person.” In addition to his producing duties for Better Man, Steve starts his new job as special projects editor at AARP The Magazine (“It’s a juggernaut”) on Monday and is currently working with Danica Patrick on her new book, Pretty Intense, which is scheduled to be published in December.

Gwen, who in addition to her work with the Giants and Knicks sees private clients in the Tri-State area, has a book out in July titled Tactical Mobility, which she co-wrote with a Navy Seal and Marine. It tackles various issues veterans face in rehabilitation. She also volunteers her time working with Bob and Lee Woodruff on behalf of the couple’s foundation, teaching to yoga to injured veterans and their families.

In addition to his flourishing career in broadcasting and his Yoga Is My Gym business, Brian is heavily involved in supporting the people and organizations that have heavily influenced his life. This weekend he is headed to Camp Pendleton to attend a dinner in honor of the son of his high school baseball and football coach Jerry Lee, who is retiring from Marine Corp. He is also going back to his Alma Mater, the University of Texas at Austin, to deliver the commencement address later this month to the school’s College of Communications’ graduates. His message? “Don’t let society define you, you define you.”

And in August, Brian is hosting a golf event in Austin to benefit the local Boys and Girls Club, where he sits on the chapter’s board of directors. “The Boys and Girls Club saved my life,” he told me. “I never met my father. Stephanie Hill, a lady in the neighborhood and my grandmother raised me. If I can do what I did, anyone can.” A Better Man indeed.

[Diane Clehane posts reports from Michael’s restaurant every Wednesday. She can be reached via email at lunch@adweek.com.]